There has been madness indeed, but not the usual one.

There have been no less than 21 withdrawal so far. That must be a record and we might have more today if some players test positive for covid-19 or have been in conctact with someone who does. You can seen the full list of withdrawals, the replacements for them, and the results so far on snooker.org.

Despite the absence of a crowd, the day was not short of drama… including, players being caught because they didnt know or remember the variant rules

On thing that is not on that “summary” is the fact that failing to hit a cushion, or a “time” fault results in a 5 points penalty.

Mark Allen beat Jimmy Robertson in the first round of the BetVictor Shoot Out with a 142 total clearance, the highest break made in the ten-year history of the event. 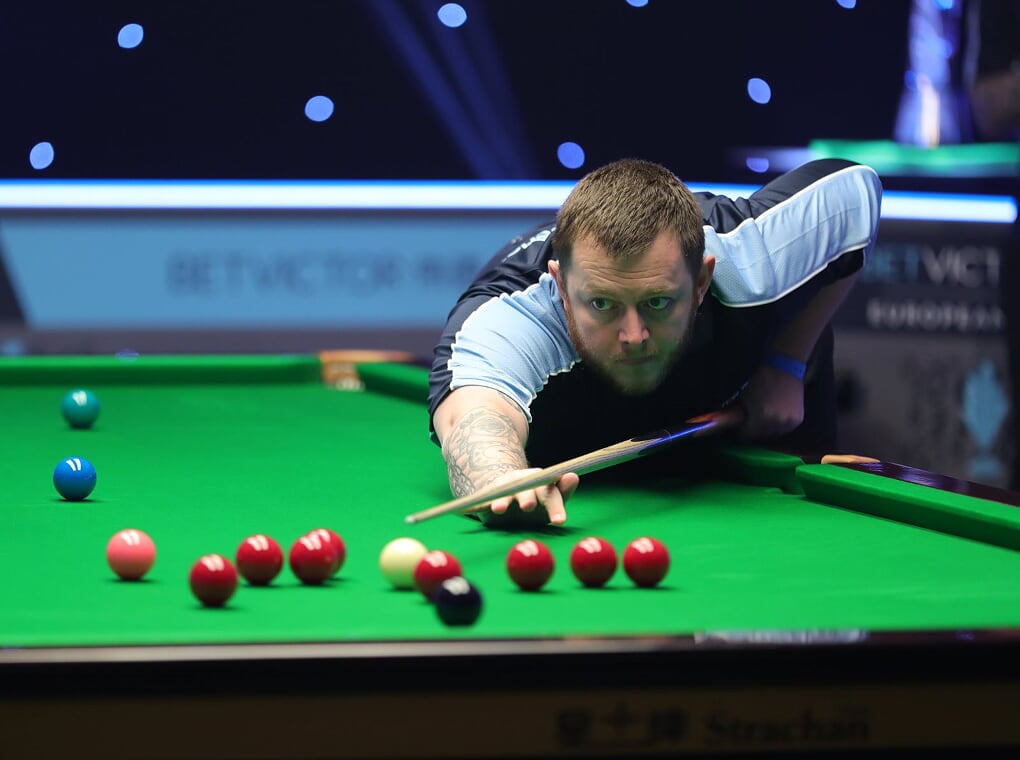 The Pistol’s tremendous break eclipsed the previous record of 139 set by Thepchaiya Un-Nooh in 2019. Allen goes through to the last 64 of the world ranking event in Milton Keynes.

There was no shortage of drama in the first session of the tournament which has a unique set of rules; all matches lasting a maximum of ten minutes.

Sam Craigie led amateur Phil O’Kane 38-33 with just a few seconds on the clock. Thinking victory was secure, Craigie carelessly tapped the cue ball at a red, but neither ball hit a cushion, which meant his opponent was awarded five penalty points, leaving them tied at 38-38. That meant a sudden death blue ball shoot, and a relieved Craigie came out on top.

Matthew Stevens provided another thrilling finish with a last gasp win over amateur Fergal Quinn. With less than 30 seconds remaining, Quinn led 53-37 when he missed a long pot on the final blue. Stevens was left with a tricky blue to a baulk corner and slotted it home before adding pink and black to book his second round place.

Defending champion Michael Holt got off to a strong start by beating Jamie Jones with a break of 87. That was Holt’s 14th win in his last 15 matches in this event.

Rebecca Kenna, one of two female players in the draw, was beaten by Germany’s Simon Lichtenberg. Kenna was unlucky at a crucial moment in the match as the ‘beeps’ which count down on the shot clock could not be heard in the arena and she committed a time foul.

A WST statement explained: “The players both agreed that they did not hear the ‘beeps’ in this incident, so it would appear that there was a temporary fault in the sound effects in the arena. The lights in the arena were working so the players still had a warning when the time was ticking out. The referee is able to hear the ‘beeps’ in his ear piece. He made the correct decision that there was a time foul. It is an unfortunate incident for the players but the rules were followed.”

here is Rebecca Kenna after her match:

Rebecca was a good spots in her interview, but she was really aggrieved, and it showed on her social media. Given that there was clearly a malfunction, and that this was her first ever appearance in a ranking event on television, she could have been offered another chance? Maybe being top resserve in case someone tests positive today?

Despite the win, and the high break record, Mark Allen is not a fan of the format:

Asked if it’s an event that could kickstart a season, Allen said: “It would be a completely false kickstart as this is not snooker.

I’VE NOT BEEN A FAN OF THE EVENT SINCE THEY CHANGED IT TO A RANKING EVENT. I THINK THERE ARE A LOT MORE IMPORTANT TOURNAMENTS IN THE YEAR AND THEY HAVE TAKEN AWAY A BIT OF FUN OF THE EVENT, AND WITH NO CROWDS THIS YEAR IT IS EVEN LESS FUN.

“But I won’t enter an event without trying to win so I am here to win.”

Here are some short videos that were shared on twitter by WST and Eurosport:

Selby, Murphy And Williams Through

Big guns Mark Selby, Shaun Murphy and Mark Williams all survived the first round of the BetVictor Shoot Out on Friday evening.

They are through to the last 64 of the one-frame knockout world ranking event in Milton Keynes. The event concludes on Sunday when the winner will bank £50,000.

A deep run in this event would be handy for Murphy as he currently lies 19th on the one-year ranking list, with only the top 16 after the next event – the  BetVictor Welsh Open – to qualify for the Cazoo Players Championship. He saw off Luca Brecel thanks to breaks of 32 and 29.

Selby got the better of a cagey frame against Billy Castle by a 41-31 scoreline. Williams might have lost if his opponent Paul Davies had not missed a tricky red to a top corner late in the frame, but in the end it was the three-time World Champion who won 58-37 to get his name into the hat for round two.

Ian Martin, a 38-year-old businessman from Bury, was one of five amateurs to win on day one, as he beat Robbie McGuigan 59-16. The other amateurs to score victories were Michael White, Leo Fernandez, Declan Lavery and promising English 18-year-old Connor Benzey, who beat Stuart Carrington 43-0.

“I’m over the moon, it makes all the practice worthwhile,” said Benzey. “My safety was really good which is something I have been working on. It was my first time in front of the TV cameras and I felt great, I really enjoyed it. I’ll be going for Q School later this year and trying everything I can to get on tour.”

Fightback of the day came from Martin O’Donnell as he recovered a 34-0 deficit to beat Ben Woollaston with an excellent break of 41 – albeit helped by a fluked red on 17.

I quite enjoyed the Eurosport app add-free broadcasting, with Ronnie, Jimmy and Andy in the studio, Rachel interviewing the winners between frame. I definitely prefer this event without the so often rude crowd.

Ronnie might be critical of fellow players at times, but he’s also the first one who will defend them when they make the odd mistake and he did on several occasions yesterday. Just like Mark Allen, as a player and a snooker purist, he doesn’t like to play in this format, but admitted that he enjoys watching it.