There was just one match yesterday: the semi-final between John Higgins and Kyren Wilson. John Higgins won it by 6-1. Here is the report by WST: 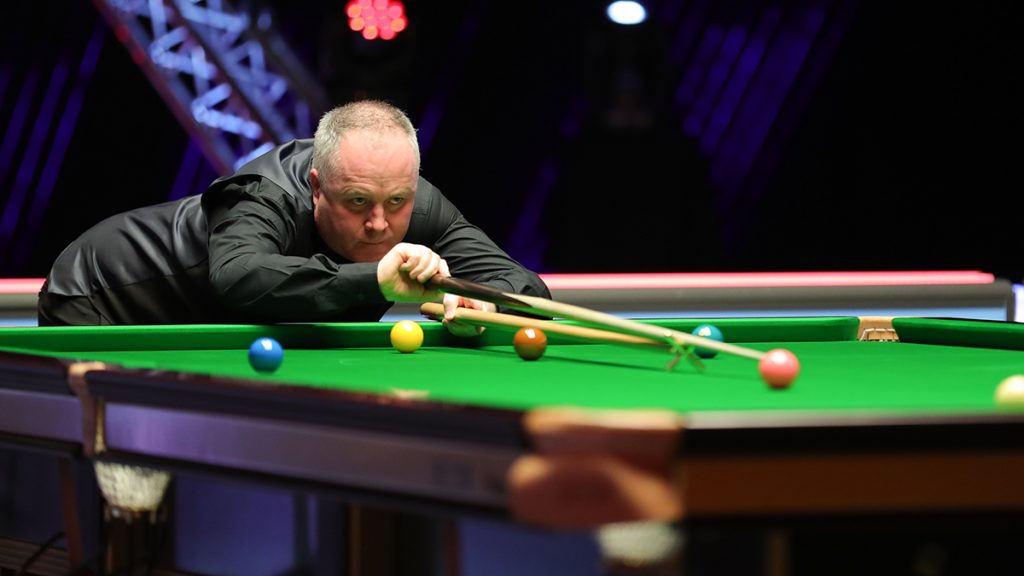 John Higgins kept his sensational form going at the Cazoo Players Championship as he beat Kyren Wilson 6-1 to set up a final with Ronnie O’Sullivan.

Higgins came so close to becoming the first player ever to reach the final of a ranking event (other than the Shoot Out) without conceding a frame. Having whitewashed Jordan Brown and Mark Selby 6-0 in his first two matches this week, he led 5-0 tonight, only for Wilson to get one on the board. But missing out on that record will not bother Higgins as he looks ahead to a potentially epic clash with O’Sullivan, with both players at the top of their game.

First to ten frames on Sunday takes the trophy and £125,000 top prize. Scotland’s 45-year-old Higgins is chasing his 31st career ranking title and first since the 2018 Welsh Open. Not since he beat O’Sullivan 9-2 at the 2005 Grand Prix have the pair met in the final of a ranking event. However, including invitation events they have met in a total of 17 finals, O’Sullivan winning ten of those.

Higgins admits he is playing some of the best snooker of his 29-year career, having made a change to his technique, bringing the cue tip closer 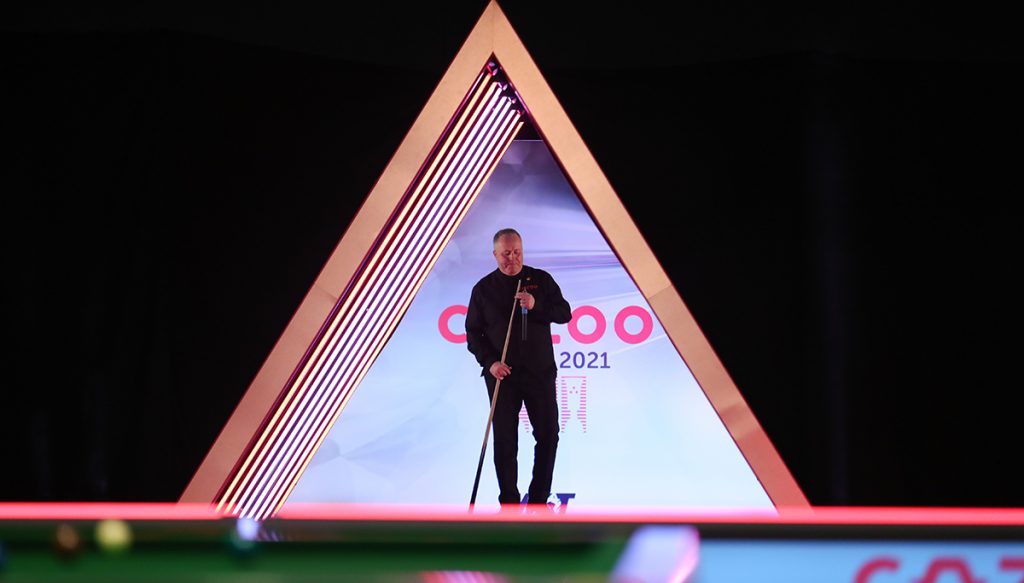 to the white ball at address. He was runner-up to Yan Bingtao at the Betfred Masters last month and will be determined to go one better this time.

A fragmented opening frame tonight went his way and he took the second with a break of 108. In frame three, Higgins had eyes on a 147 and potted 11 reds with blacks before missing a mid-range 12th red to a top corner on 88.

Wilson went for an ambitious long blue early in frame four, but missed his target and was punished again as world number six Higgins made 70 for 4-0. Kettering’s Wilson looked in control of frame five after a run of 65. But Higgins, 50 points down, converted a superb pot on a red to a centre pocket to set up a 51 clearance.

World number five Wilson at least had the consolation of becoming the first player this week to take a frame off Higgins thanks to his break of 102 in frame six. But his hopes were ended by a run of 74 from Higgins in the seventh.

“I won a massive frame to go 5-0, because if Kyren gets firing he can get on a roll,” said Higgins, who has made five centuries and ten more breaks over 50 this week. “He’s up there with the best players in the world so I’m over the moon to beat him 6-1.

“I have moved my tip closer to the cue ball when I address it. One of my friends told me they had seen Ronnie and Stephen Hendry talking about it on Instagram, saying my tip was a long way from the cue ball. I looked back at recent footage and they were right, then I looked at footage of when I was younger, and I was a lot closer to the white. It must have crept into my game over the years like a bad habit. That has given me something to work on and now I have corrected it and I’m trying to repeat the same thing on every shot.”

Looking ahead to tomorrow’s final, Higgins added: “I have always said Ronnie is the best ever, in my eyes. I grew up playing him, and he’s still winning the big events, challenging Selby, Robertson and Trump. The likes of me and Mark Williams are in the tier below, trying to nick a title here and there.”

I will be honest: I don’t entertain any hopes of a Ronnie win today. Asked who will win today, Stephen Hendry on twitter answered “Higgins” and added that he usually does when he is on top form. Unfortunately, I have to agree. Ronnie’s game suits Higgins, as he knows that he will get chances, not many of them if Ronnie plays well, but, when himself is at his best just one is usually enough. Higgins’ game doesn’t suit Ronnie as Higgins leaving a good chance only comes once in a blue moon. Therefore Ronnie will have to take risks and go for difficult pots. There is no way he can beat Higgins playing defensively. Mind you, Mark Selby, probably the strongest defender in the game, got restricted to 3 balls and seven points. I just hope that Ronnie can make a fight of it, that he isn’t destroyed the way Jordan Brown, Mark Selby and Kyren Wilson have been. That John Higgins has lost just one frame so far in this event is a scary thought! And here is more bad news: if Higgins wins tonight, the two are currently set to meet in the first round of the 2021 Tour Champinship. Aargh!

I have put Higgins’ quotes in bold. The first part is particularly interesting. John Higgins and Ronnie, at 45, are still constantly looking for ways to improve. After nearly 30 years as pros, they are still students of the game, they are still putting work into bettering their own technique, into finding new ways to improve their reliability at the table. This is admirable and something a lot of younger players could learn from.

Neil Robertson will certainly not disagree with this last sentence. He has been speaking to Phil Haigh about his views on the younger players:

Neil Robertson feels young players in snooker, specifically in the UK, need to work much harder at the game and has backed Ronnie O’Sullivan in trying to cajole them into action.

Robertson is referring to O’Sullivan’s comments from the World Championship last year when the Rocket said he would have to ‘lose an arm and a leg’ to fall out of the world’s top 50, so bad are the players emerging in the game.

Unsurprisingly these comments ruffled feathers but there have been positives to emerge from Ronnie’s scathing assessment of his competitors.

Jordan Brown came from nowhere to win the Welsh Open last week as a 750/1 shot, beating Mark Selby, Stephen Maguire and then O’Sullivan in the final.

The Northern Irishman began that event ranked #81 in the world and said that O’Sullivan’s comments had riled him up and spurred him on to victory in Newport.

Ronnie, despite tasting defeat at Celtic Manor, was pleased that his words had made an impact on Brown and Robertson has echoed the sentiments of the world champion.

The Australian believes there is much more work to be done by the young players in the game and if the senior players need to deliver some home truths then so be it.

‘Ronnie made comments about not producing or not reaching the standard that they should be…and by the way Ronnie would be so happy for people like Jordan, Jordan said those comments fired him up to practice more and work harder, that will make Ronnie really happy,’ Robertson said at this week’s Players Championship.

‘I’m in the same boat as Ronnie where I don’t think the players lower down the rankings are practicing hard enough, especially the younger ones from the UK.

‘A lot of tournaments they’re sort of partying, not putting in the hard work, all the time on Instagram checking their followers. You can’t be a top sportsman and do all that stuff, you have to put in the hard work.

‘Either that would have upset a lot of low-ranked players, they’d have gone into their shell and thought, “oh Ronnie’s saying all this” or they could go, “you know what, he’s right, I can work harder so I’m going to work harder.”

‘Ronnie wants to see all the lower-ranked players reach their potential as players, so what he did was good, I felt.

‘We wouldn’t have had the Jordan Brown story if Ronnie hadn’t said what he said, I’m almost convinced of that. Jordan was someone who maybe…I don’t like the tag, but a journeyman tag, I suppose, but he’s changed it.

‘He’s worked harder, got a coach, practiced with Mark Allen and what you’re going to get now is a lot more lower-ranked guys believing they can beat top players.

‘I’m really happy for Jordan, he’s so nice. Hopefully we can start seeing more of the younger players coming through from the UK.’

Robertson made a similar statement at the Masters in January when he was beaten by Yan Bingtao, who went on to win the event.

The Thunder from Down Under feels that the Chinese sensation, who turned 21 this month, is a perfect example for young UK players and how they should go about developing their careers.

‘Yan is 20 years old but seems to have the experience of someone who’s 40,’ Robertson said in January.

‘I can’t praise him highly enough. He’s got all the attributes, the hunger, the determination to try to win these events and that’s really good to see from a young player.

‘You see a lot of them are on social media non-stop, they care more about how they look coming out of swimming pool than what they do on a snooker table. So you’ve got to credit the guys who want to make things happen in their career.’

Robertson added this week: ‘Yan Bingtao works harder than anyone at the game, absolutely 100% and there you go, he won the Masters.’

Ronnie and Neil know each other very well, they are friends. Neil wouldn’t say this if he wasn’t 100% convinced about it. He’s one of the nicest person you could want to meet; there is no nastiness in him or in what he says there. Both him and Ronnie care for the future of their sport. “Diplomacy” has never been Ronnie’s strong point. He says things as he sees them, and often in a colourful fashion as well. But, more often than not, there is truth in what he says. A lot of fans should think twice before getting up in arms about “being disrespectful”. Telling the truth is never disrespectful and accepting the truth is  usually useful as it’s the first step towards changing what needs changing.