John Higgins won the 31st title of his carrer yesterday beating Ronnie by 10-3 in the Final. It has been an extraordinary week for John, who only lost four frames over the whole tournament, three of them to Ronnie yesterday. To his own assessment he has played the best snooker of his entire career to win this tournament.

Higgins In Charge Of Final

John Higgins built a 6-2 lead over Ronnie O’Sullivan in the first session of the Cazoo Players Championship final, and needs just four more frames to win his first ranking title in three years.

A battle between two of snooker’s all-time greats has been dominated so far by Higgins, who has lost just three of the 27 frames he has played so far this week in Milton Keynes. However, in the last frame of the session, O’Sullivan showed a glimpse of his genius with the highest break of the tournament so far, to raise his hopes of a fight back in the concluding chapter which starts at 7pm. First to ten frames will take the £125,000 top prize.

Higgins is aiming for his 31st ranking title and first since the 2018 Welsh Open. The 45-year-old Scot, competing in his 51st ranking final, has played some of the best snooker of his career this week, notably in a 6-0 defeat of Mark Selby in the quarter-finals.

O’Sullivan is playing his 57th ranking final, equalling Stephen Hendry’s record. The 45-year-old from Essex is seeking his first title since becoming World Champion for a sixth time last August. He has lost three ranking finals already this season, including a shock 9-8 reverse against Jordan Brown in the BetVictor Welsh Open a week ago.

These two legends both turned pro in 1992 and have met on 64 previous occasions, O’Sullivan winning 35 of those. The Englishman has won ten of their previous 17 finals, though they have not met in the final of a ranking event since the 2005 Grand Prix, when Higgins came out on top 9-2.

O’Sullivan will be second in the world rankings regardless of the result, while Higgins will move up from sixth to fifth if he lands the title.

Four-time World Champion Higgins got the better of a fragmented opening frame today, then won the second with a break of 92. A missed long red from O’Sullivan in frame three let Higgins in for a run of 68 for 3-0.

It was spell-binding stuff from the Wizard of Wishaw in the the next two frames as total clearances of 142 and 138 put him 5-0 ahead and brought his tally of centuries for the week to seven. He had a scoring chance in frame six but made just 26 before running out of position, and this time O’Sullivan punished him as a long red set up a break of 82 to get one on the board.

Frame seven lasted 35 minutes and came down to the colours. O’Sullivan went for a risky double on the yellow to a baulk corner and was fortunate to leave it safe. He later potted the yellow but then attempted a do-or-die thin cut on the green to the same pocket and this time left it hanging over the jaws. Higgins cleared to the pink for 6-1.

In the last of the session, a long red set O’Sullivan up for a marvellous 144, eclipsing Barry Hawkins’ target of 143 for the £10,000 high break prize. The Rocket might need more of the same if he is to take eight of the last 11 frames tonight.

Playing the best snooker of his 29-year career, John Higgins hammered Ronnie O’Sullivan 10-3 in the final of the Cazoo Players Championship to win his first ranking title in three years. 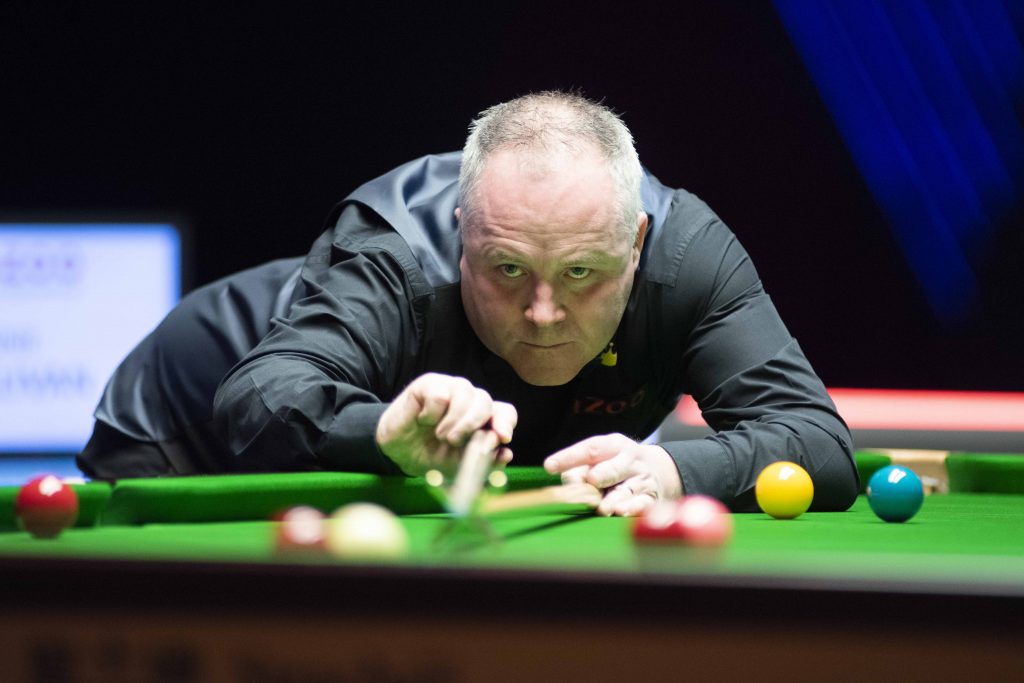 Remarkably, Higgins won the tournament for the loss of just four frames, having beaten Jordan Brown 6-0, Mark Selby 6-0 and Kyren Wilson 6-1 in his first three matches in Milton Keynes.

The final between two giants of the baize, who have clashed on the table 65 times in a rivalry spanning three decades, turned out to be a one-sided affair as Higgins made three centuries and five more breaks over 50 as he romped to the £125,000 top prize and captured his 31st ranking title.

A change to his technique, moving the cue tip closer to the white ball at address, has worked wonders for Higgins in recent weeks. The Scot was runner-up to Yan Bingtao at the Masters and has gone one better this week to land his first ranking crown since the 2018 Welsh Open. At the age of 45 and having been a pro since 1992, he insists he has never struck the ball more cleanly and with such control and confidence.

The result lifts him one place to fifth in the world rankings, and crucially boosts him from tenth to fourth on the one-year list and guarantees his place at the Cazoo Tour Championship at the end of March. He also earns a spot at the Champion of Champions later in the year. No doubt Higgins will already have one eye on the Crucible in the Spring; in this week’s form he will be a mighty force.

O’Sullivan misses out on a 38th ranking title and third Players Championship crown. He has now lost four finals since conquering the Crucible for a sixth time last August. He was beaten by Judd Trump at the Northern Ireland Open, Mark Selby at the Scottish Open, Jordan Brown at the BetVictor Welsh Open and now Higgins. In truth, no opponent could have lived with Higgins this week, so strong was he in every department.

Leading 6-2 after the first session, Higgins took the first frame tonight with a break 51, initiated by a tricky thin cut on a red to a baulk corner. O’Sullivan hit back with a break of 110, the fourth century of the match, but didn’t score a point in the next two frames as Higgins made 70 and 77 to lead 9-3 at the interval.

Fittingly, Higgins wrapped up the match in frame 13 with another century, a superb 127.

“It’s the best week of my snooker career,” said Higgins, who has now won 30 of his 65 matches with O’Sullivan, and triumphed in eight of their 18 finals. “I have won bigger tournaments, but in terms of the way I have played and felt the whole week, it’s my best ever. I’m delighted.

“I was in the zone tonight, I would have loved to play more frames. I was enjoying it, especially against an opponent like Ronnie.  In the first session he went for a lot of balls, and that put me off a bit. He obviously fancied it, the way he was playing. To lead 6-2 was brilliant, and I played well again tonight.

“It’s easy to get into bad habits in this game and I don’t have a coach. I am just glad I have rectified the technique issue I had, and I will stick with the change I have made. To win a big tournament like this guarantees me the chance to keep competing against the top players for at least the next couple of years.

“Before Christmas, people wouldn’t have seen me as one of the favourites for the World Championship. I’ve got a chance now.”

O’Sullivan said: “I knew I would have to play very well today against John but in the end I got peppered by him, just as everyone else has this week. It’s great to see him back playing well, it’s good for snooker and I’m happy for him. What he has done on the table this week, you don’t see that very often. Hopefully the next time I get to a final it will be my day.”

Now where do I start about this match?

Probably with this admission: I expected this to happen as those who did read yesterday’s post will know. I know that when John really plays at his very best, he will beat Ronnie more often than not – something Stephen Hendry said on twitter as well yesterday – and this week he had been playing the best snooker I have ever seen from him. I knew that Ronnie would be coming into this match without much confidence: he has played John often enough to know that he can’t compete with him in the tactical department when John is at his very best, and he had seen what John had done to Mark Selby, restricting hin to only 3 balls and 7 points over the whole match.

The commentators – Ken Doherty in particular – criticised Ronnie for lacking patience. I’m not sure that’s the correct assessment of what Ronnie did, to no avail, in the first part of the match. That why I have put that bit of John’s quotes in blue. Those two know each other inside out, and psychology is very important in snooker. There are almost always underlying mindgames in the course of a snooker match. I believe that Ronnie, knowing that he wouldn’t beat John in this form at his own game, tried to derail him a bit, hoping that, maybe, his concentration and focus would drop a notch. It did not work and he found himself 5-0 down, an almost hopeless position against such a formidable opponent.

That’s now four defeats in four finals for Ronnie. It’s bound to hurt, although Ronnie, speaking to Eurosport looks detrmined to stay positive and continue to try his best.

Higgins called O’Sullivan “the best ever” during his victory speech at the Players Championship, while O’Sullivan admitted he had put pressure on himself after seeing the flawless Scot charge into the final with some exceptional displays. O’Sullivan, who has lost all four finals he has played in 2020-21, added that he “can’t be too disappointed” with his recent results.

Ronnie O’Sullivan called John Higgins’ display in the Players Championship final a “masterclass” after being outplayed in Sunday’s showdown.
The Rocket was brilliant on his few extended visits at the table – including breaks of 144 and 110 – but came up against an inspired opponent as he went down 10-3.

“John was strong. I knew I had to play well today and maybe I put a little bit of pressure on myself, thinking I had to play as well as I could to have a chance,” O’Sullivan told ITV.
“Once you don’t punish John and he’s playing as well as he is, then you do a lot of sitting in your chair.
“There’s not a lot you can do sometimes when someone is as good as John and he’s tying you up in knots and making 70s, 80s, 90s, 100s. You just have to sit it out and wait for an early night.”

Higgins’ run to a first trophy in three years included a memorable quarter-final win over Mark Selby, where he restricted the three-time world champion to just seven points.
Meanwhile, O’Sullivan has tasted defeat in all four finals he has reached this season.
“All you can do is do your best. If your best is just good enough to get you to finals then you have to accept that,” said O’Sullivan, who also finished runner-up at the Northern Ireland Open, Scottish Open and Welsh Open.
“Then hopefully one week I’ll get it right on the final day and hopefully get a trophy. But you can’t be too disappointed. There are 126 players that would probably swap positions with me at the moment so you’ve got to try and take some positives from it.
“John was unbelievable this week, fantastic, played brilliant snooker. A masterclass today.”

And the bad news is that, as things stand, he’s bound to face John again in the first round of the Tour Championship next month. Not a happy propspect …