This is WST report on the first evening at the 2021 World Grand Prix:

Zhao Xintong’s winning streak was brought to an end in the first round of the Cazoo World Grand Prix in Coventry as he was beaten 4-2 by the lowest seeded player in the event, Martin Gould.

Gould reached the last 16 of last week’s BetVictor Scottish Open to give himself a chance of qualifying for the first event of the Cazoo Series, and in the end he needed Ronnie O’Sullivan to beat Li Hang in the quarter-finals to keep him in the 32nd and last slot. O’Sullivan obliged with a 5-4 victory, which meant that Gould was sent to Coventry for the £380,000 tournament. And he took full advantage tonight as he came from 2-1 down to win the last three frames.

China’s Zhao came into the event on a high having won his first pro title and £200,000 at the Cazoo UK Championship eight days ago, but this time he failed to live up to his top-seed billing.

“The century he made in the third frame actually gave me the kick start I needed,” said former German Masters and Shoot Out champion Gould. “After that I decided to up the tempo and get a nice rhythm around the table going.

“I didn’t watch any of Ronnie’s game against Li Hang. I was on my way home while they were playing, then I got my washing on and made myself a couple of tea. A mate texted me and told me I was in. I’ll have to treat Ronnie to some dinner next time we have a game! I feel as if I am on a freeroll now.

“I have been playing with a new cue for the last couple of weeks, I feel very comfortable with it and I am enjoying the challenge of something new. I’d had the previous cue for 25 years, then it died on me just before the Scottish Open. I almost pulled out because I felt there was no way I could get used to a new one, but I’m glad now that I played. I’m just looking for that week where everything clicks – it could be this week, you never know.”

Gould’s opponent in the last 16 will be Masters champion Yan Bingtao, who beat Mark King 4-1 with a top break of 111. 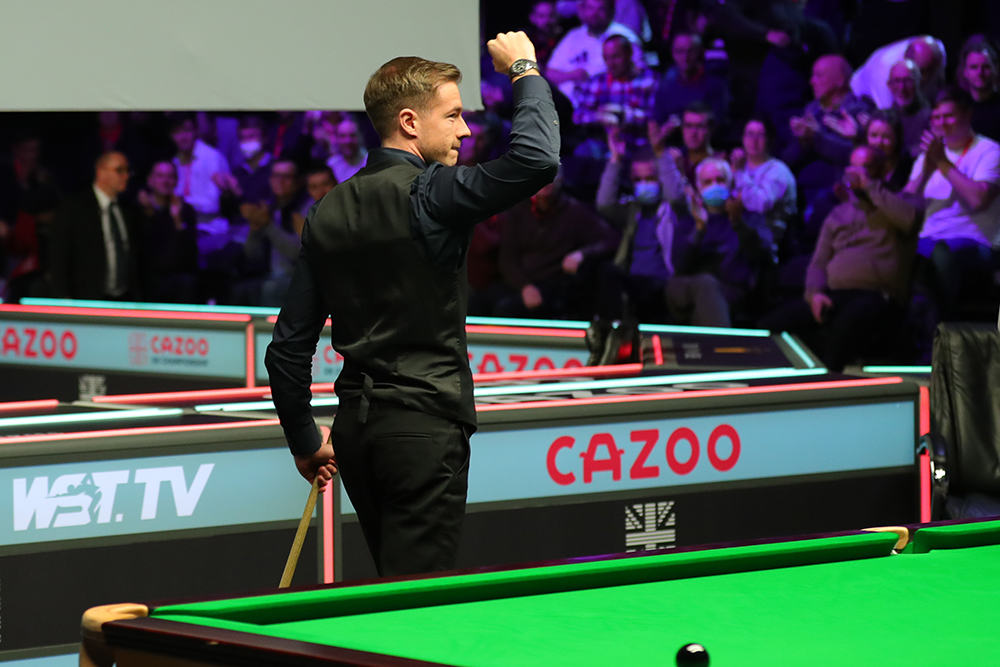 Jack Lisowski, runner-up to Judd Trump in this event last year, beat Mark Williams 4-3 in a thrilling match which had six breaks over 50 and an average frame time of just 13 minutes.

From 2-1 down, Williams knocked in breaks of 117 and 77 (helped by a monster fluke) to lead 3-2, then Lisowski took frame six with a run of 74. In the decider, Williams made 35 before missing a tough red to a centre pocket, and Lisowski punished him with a superb 94 which included several difficult pots to keep the run going.

“When you get these opportunities to beat a top player in a deciding frame, you have to step up,” said Lisowski, who now meets Stephen Maguire or Anthony McGill. “It was a pretty sexy break in the last frame, they just kept going in.

“I probably have the worst concentration of any player. I have been talking to Peter Ebdon on the phone and in the last frame I was thinking of the things he has told me. He is the strongest player mentally ever. If he told me to do star jumps during the game I would do it, I don’t need to know why. When I went behind it was time to put what he has told me into practice. I stood up to it when the question was asked, and that’s what the top players do. There’s no better feeling.”

I wasn’t surprised at Zhao’s poor performance. He has to adjust to his new top player status as well as to the pressure and expectations that come with it. It may take a bit of time. He has good people around him at Victoria’s academy, so he should have the support he needs.

Martin Gould on a “freeroll” is bad news for everyone but himself and the neutral fans. He’s a tremendous potter and very dangerous when on form and playing with freedom.

Mark Williams wasn’t happy to have to play in late evening. He is still feeling exhausted because of covid and hinted that he was at risk to fall asleep again if not “helped” by lucozade. He certainly didn’t lack energy when playing the “monster fluke”.

As for Mark’s conqueror, Jack, I hope that he takes Peter Ebdon’s advice only on snooker…

The “Sheriff”, Anthony Hamilton beat Kyren Wilson by 4-3 at ungodly (Greek) hours. That is a mini upset, only mini because there are no big upsets when only the top 32 in-form players are competing in an event. There is no mention of this in the above report probably because whoever writes those pieces was alreasy tucked in bed when they finished…