The last day at the Worlds qualifiers produced more surprises although maybe no major ones. Here is the report by WST: 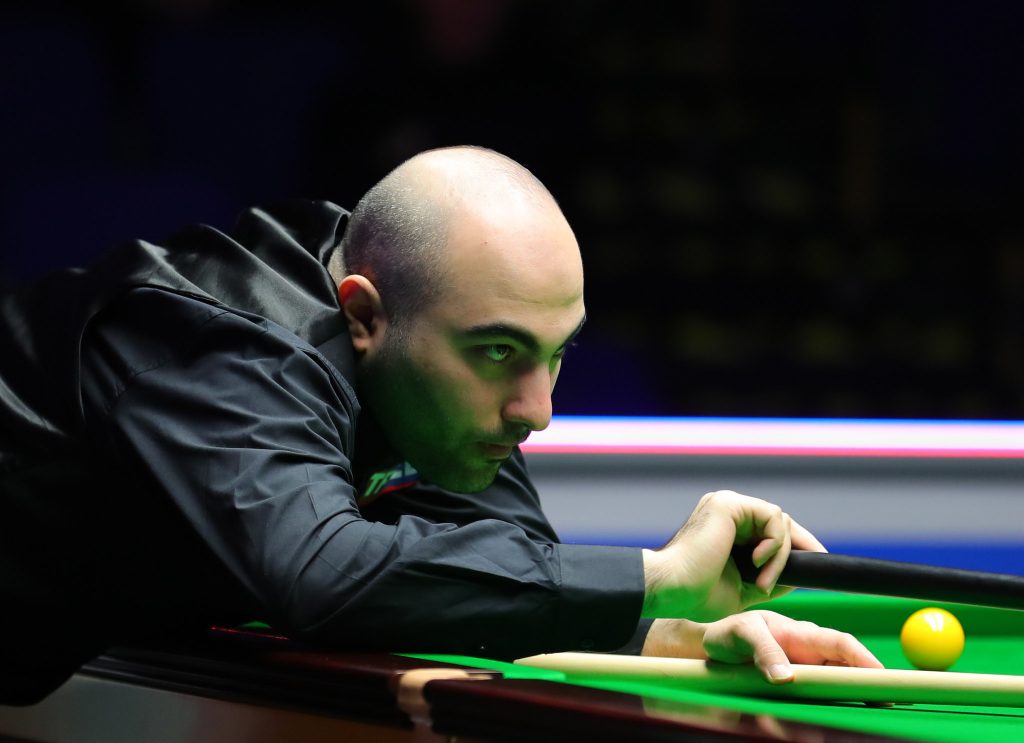 Hossein Vafaei will become the first player from Iran to compete at the Crucible, thanks to a dramatic 10-9 victory over Lei Peifan in the final qualifying round of the Betfred World Championship.

Vafaei said earlier in the week that he would “fight until my last blood” to make it to the final stages of snooker’s biggest event, and he was forced to battle until the very last ball, after China’s Lei failed to take a gilt-edged opportunity to win the deciding frame.

World number 18 Vafaei won his first ranking title at the Shoot Out in January and the 27-year-old’s breakthrough season continues with his first visit to the Theatre of Dreams. He will be a tough fixture for whichever of the top 16 seeds is pitched against him when the draw is made at 11am on Thursday.

Vafaei led 4-1 in the early stages before Lei, who was also seeking a Crucible debut, recovered to 5-5. There was never more than one frame between them in the closing straight, and in the last frame Lei led 61-0 and needed just two pots for victory when he missed a straight-forward red to a centre pocket. He later missed a tough long pot on the fourth-last red to a baulk corner, letting Vafaei in for a fantastic 54 clearance.

“I’m so happy I have made my people proud,” said Vafaei. “I was so nervous today, all of my body was shaking. I was eating a lot of chocolate to try to calm myself down but it wasn’t working! I forgot how to hold the cue. I promise I will play better than that at the Crucible, I can’t wait to get there. Thank you to everyone who has supported me, I will try my best to be a people’s champion.”

Jackson Page also secured a Crucible debut, having won four qualifying matches, culminating in a 10-6 defeat of David Grace. Welsh 20-year-old Page made top breaks of 104 and 116 in an excellent performance.

“I have always been quite calm, taking everything in my stride, maybe that’s Mark influence,” said Page, who practises with three-time champion Mark Williams. “I won’t be there to make the numbers up, I want to do a bit of damage.” 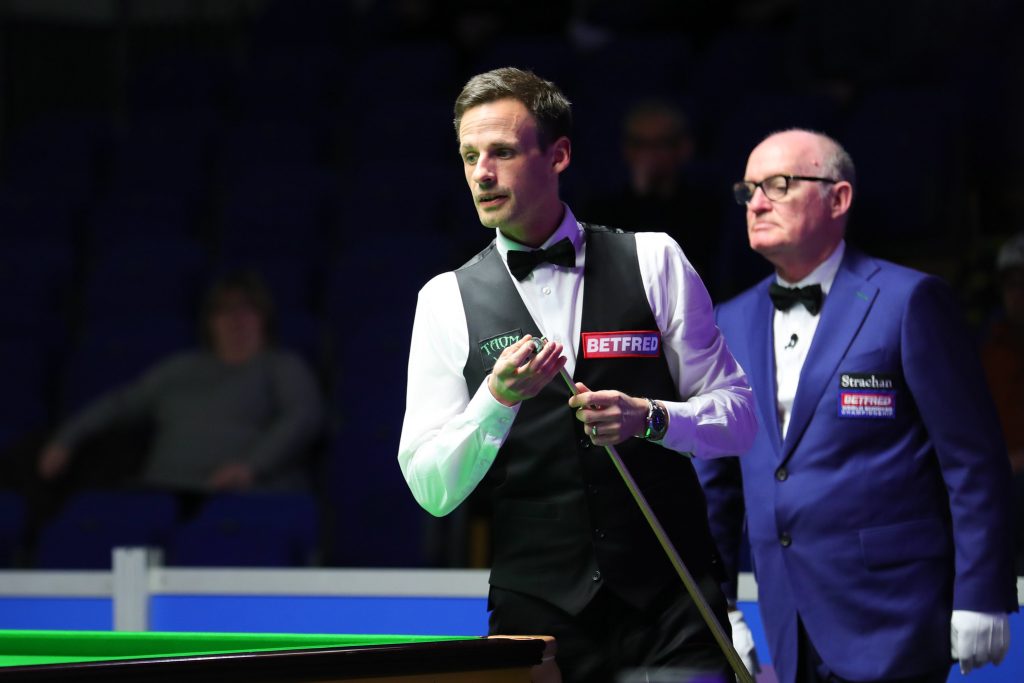 David Gilbert, who reached the semi-finals in 2019, secured his return with an emphatic 10-3 victory over Anthony Hamilton. A top break of 100 helped Gilbert into the last 32.

“I’m delighted to get through, it’s a great result,” he said. “Anyone who says they want to draw Ronnie or Judd is talking rubbish. I want to avoid Ronnie, Judd, Robertson and Selby! They are the big four and one of them is likely to win it. Not taking anything from any of the other seeds, but I’ll be honest and say it how it is. I feel as if my game is in good shape, at times today I felt as if I couldn’t miss.”

A battle between two players who have both been runner-up at the Crucible twice went the way of Matthew Stevens as he came from 4-0 down to beat Ali Carter 10-8. Welshman Stevens fired breaks of 100, 115 and 139 as he earned his 18th appearance in the televised stages.

“I didn’t have a shot for the first four frames so I showed a lot of character after that. When I came here I had to win a match to stay on the tour, so to get all the way through is a huge bonus,” said Stevens, who lost the final in 2000 and 2005. “It’s fantastic that so many players from Wales have got through.”

Jamie Clarke made it an even better day for Wales as he scored a 10-8 success over 2006 champion Graeme Dott. Clarke was hauled back from 8-4 to 8-8 but then took the 17th frame with a run of 76. The 18th came down to a battle on the final black, and Clarke saw an attempted double to a middle pocket miss its target but then cross the table and drop into the opposite centre.

“Both of us were absolutely gone, I was so lucky to win,” admitted Clarke, who reached the second round on his debut in 2020 before a 13-12 defeat against Anthony McGill. “From 8-4 I knew he was going to come back. I bottled it on the last frame but then got lucky on the black. I’m in absolute shock that I have got through.” 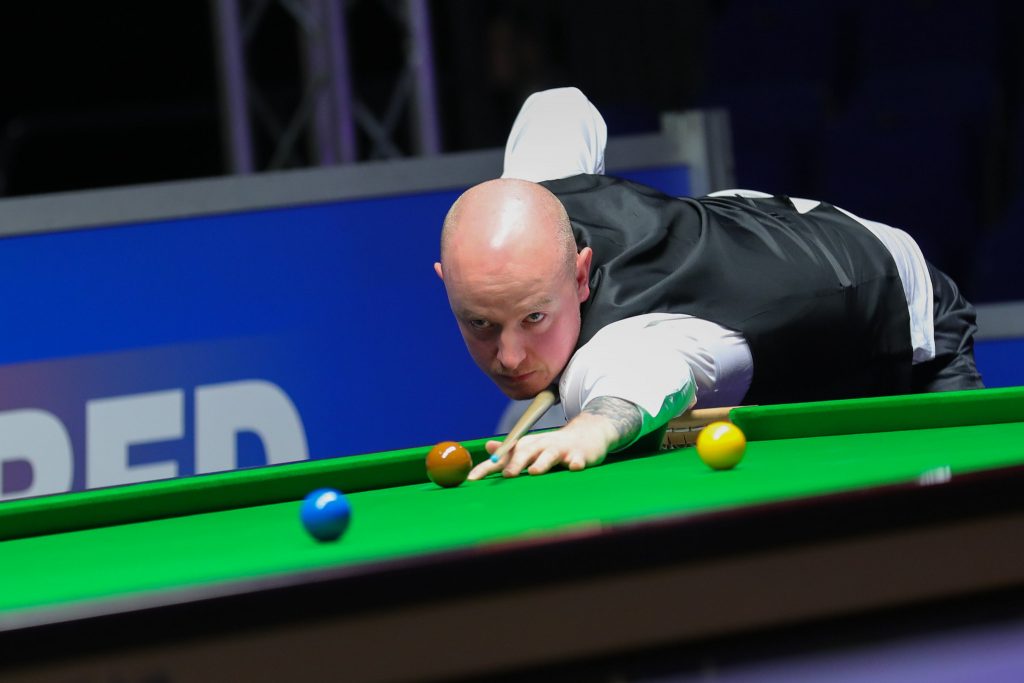 Chris Wakelin recovered a 3-1 deficit to beat Jimmy Robertson 10-7 with a top break of 131. “The pressure here is in the first round to get your ranking points,” said Wakelin. “When I get to Judgement Day I feel it’s a bonus and I don’t feel pressure. My mindset is not to even care whether I win or lose. I just told myself that if I win I’m through to the Crucible, but if I lose – there are a lot worse things going on in the world and I’m privileged to be able to play this game.”

Liam Highfield scored a 10-7 win over Yuan Sijun with a top run of 123, booking his third Crucible appearance. He said: “It will be amazing going to the Crucible with fans again because the last couple of years have been tough for everyone. I can’t wait to see it full again. Having been there a couple of times before, I go there this time with a different mindset, wanting to win matches.”

Noppon Saengkham top scored with 116 and 113 in a 10-8 victory over Gibraltar Open champion Robert Milkins. It’s an exciting time for Saengkham as, back in Thailand, his wife is eight months pregnant with their first child. “We will be having a daughter in mid May. This is a gift for her and a gift for my family and Thai people. I am fighting for all of them,” said Saengkham, one of two Thai players in the draw alongside Thepchaiya Un-Nooh.

I’m quite pleased with who came through overall and, particularly to see Matthew Stevens playing well again and… well yes win that particular match.

Lei Peifan deserves a lot of praise despite the defeat. He’s not had a great season but his run in these qualifiers has been remarkable. As for the man he beat, I have mixed feelings about him. I like his game, and it’s great to see non UK/Irish players doing well.

Ronnie O’Sullivan is not good for snooker and should retire, says Hossein Vafaei

Vafaei became the first Iranian to qualify for the Crucible on Wednesday night when he beat Lei Peifan 10-9 on the final black in the deciding frame at World Championship qualification.

The 27-year-old is passionate about representing his country on the sport’s biggest stage and believes his increasing success is helping to grow the sport in Iran.

The Prince of Persia not only wants to boost snooker’s profile at home, but globally, and he is not impressed with how, he believes, the sport’s biggest name has talked down the sport which has made him a star.

After winning his first qualifier earlier in the week, Vafaei mentioned some past O’Sullivan comments, saying: ‘I think on TV they asked that of Ronnie O’Sullivan, and he said, ‘If I was in his situation I’d rather have another job’.

‘But no. I will never give up. I’m working hard for my people, to make them proud, make my country proud and I’m born to make history.’

Vafaei once again mentioned O’Sullivan’s comments after beating Lei, and asked whether they frustrate him. In response, he told Metro.co.uk: ‘Of course. A lot of things he says frustrates me. What kind of legend are you if you call people numpties?

‘I was and am still good friends with him, but I don’t like that. Maybe he likes it and gives him a good feeling but I think people should treat him like that as well. I treat him like he deserves.’

One of O’Sullivan’s more controversial comments in recent months came when he said he would not encourage children to play snooker, which John Higgins labelled a ‘disgrace’.

‘That was very bad words, very bad for our sport,’ said the Iranian when asked for his reaction to the six-time world champion’s controversial view. ‘Listen, he doesn’t need to remind us he’s won 20 major tournaments. I think someone who is beside him should remind him that he is Ronnie O’Sullivan.

‘I don’t want to get involved in that kind of conversation really. I like him a lot, I am his fan, I love what he does but sometimes he’s disrespectful, he’s not good for the game.

Vafaei believes O’Sullivan’s complaints about venues, events and how snooker is not as ‘sexy’ as sports like golf and tennis are unfounded and it should have been the Rocket taking the sport to greater levels, instead of talking it down.

‘I am the younger generation, I want to see what he’s done for our sport. Where are the big companies?

Vafaei himself has aspirations to be the finest player in the game, and he plans on being a greater ambassador for the sport if he does reach those heights.

‘Absolutely. If I get to that position, if I can help any players I will help,’ he said. ‘I’m not a selfish person. There is plenty of food. If you get food I have food as well. If you get money, I get money as well. We should think like that.

‘He has to go and think why he doesn’t have the private jet or bigger house like a footballer. Now he’s still playing for 70 grand or 50 grand, or he’ll say he won’t play in things.

‘He wants to make our sport small, okay, it’s time to tell him: ‘Retire, man. Retire,’

I don’t really get it actually. I never heard Ronnie boasting about his money. I also can’t remember him comparing himself to others except about the way they play the game or their approach to the sport.

Ronnie never suggested that Hossein should not play, he said that himself would not want to be in his situation, most certainly because he knows that he would not cope with the stress of it.

As for what he said about kids … he actually never said that they should not play snooker, but that he wouldn’t advice any of them to take it as a profession and he explained why: most lower ranked players struggle badly financially because of the current prize money structure. He also called for that to change by at least giving them enough to cover their basic expenses. and, sorry Hossein, I’m a parent myself and I think he is 100% right. As much as I love snooker I would never want to see my children choose a profession from which they can’t make a decent living.

As for what Ronnie did for the sport, well, Hossein, maybe you are too young to remember what happened when the tobacco sponsoring stopped. The sport was hit big time, the number of events went down to 6-7 per season and … ask the like of David Hendon, or Clive Everton … for many years Ronnie kept the sport in the news and the spotlight almost single-handed. He has got highs and lows, said right and wrong things but don’t we all? But he did keep snooker on the map and in the media because of the way he played, and of who he is.. Without him, snooker could have gone the way billiards has… almost in oblivion. And you wouldn’t be here, about to play at the Crucible and criticising him…