Yesterday was the first of the final round of qualifiers and eight players booked their place at the Crucible: Scott Donaldson, Lyu Haotian, Stephen Maguire, Michael White, Thepchaiya Un-nooh, Jamie Jones, Ding Junhui and Ashley Hugill. 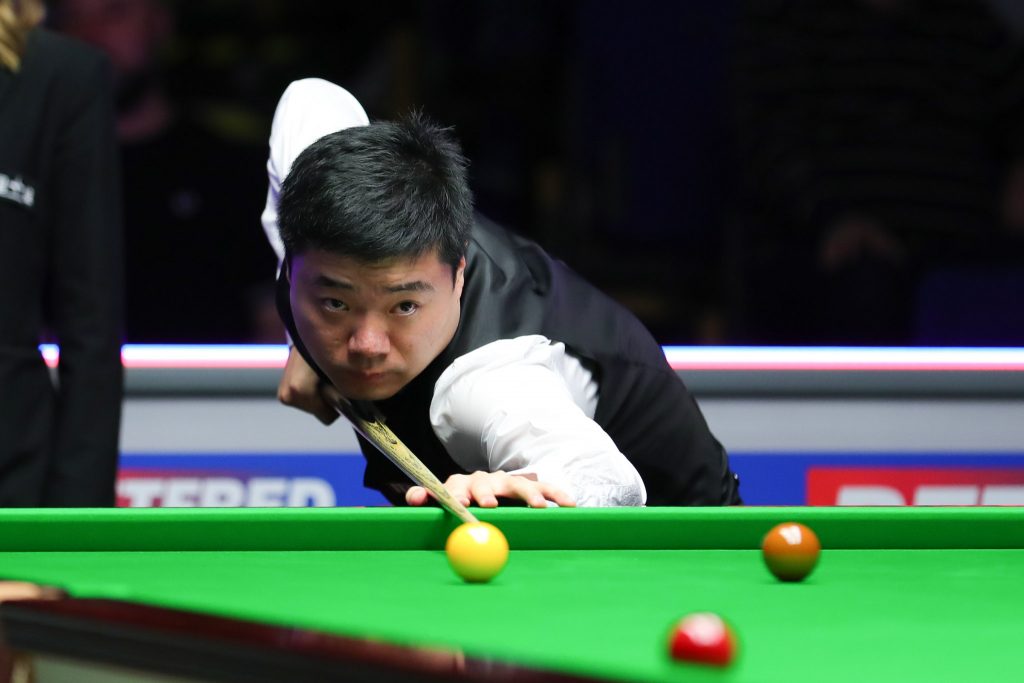 Ding Junhui avoided a shock defeat in the final qualifying round of the Betfred World Championship as he came from 7-4 down to beat David Lilley 10-7 and secure his place at the Crucible.

A loss of form has seen China’s Ding drop out of the world’s top 16 – he has not reached the final of a ranking event since landing his third UK Championship crown in 2019. But the 35-year-old remains a class act and will be among the names the top 16 seeds want to avoid when the draw for the first round proper is made on Thursday at 11am.

Asia’s greatest ever player, Ding is through to the Crucible for the 16th consecutive occasion. The last time he had to come through the qualifying rounds, in 2016, he enjoyed his best run, reaching the final before losing to Mark Selby.

“At 7-4 down I felt I couldn’t pot a ball,” said 14-time ranking event winner Ding. “He was playing very well. When I got back to 7-7 he started making mistakes. I tried to play better safety to keep him off the table. I am playing much better now than I was before Christmas. It will take time, but I believe I can find my best form again.” 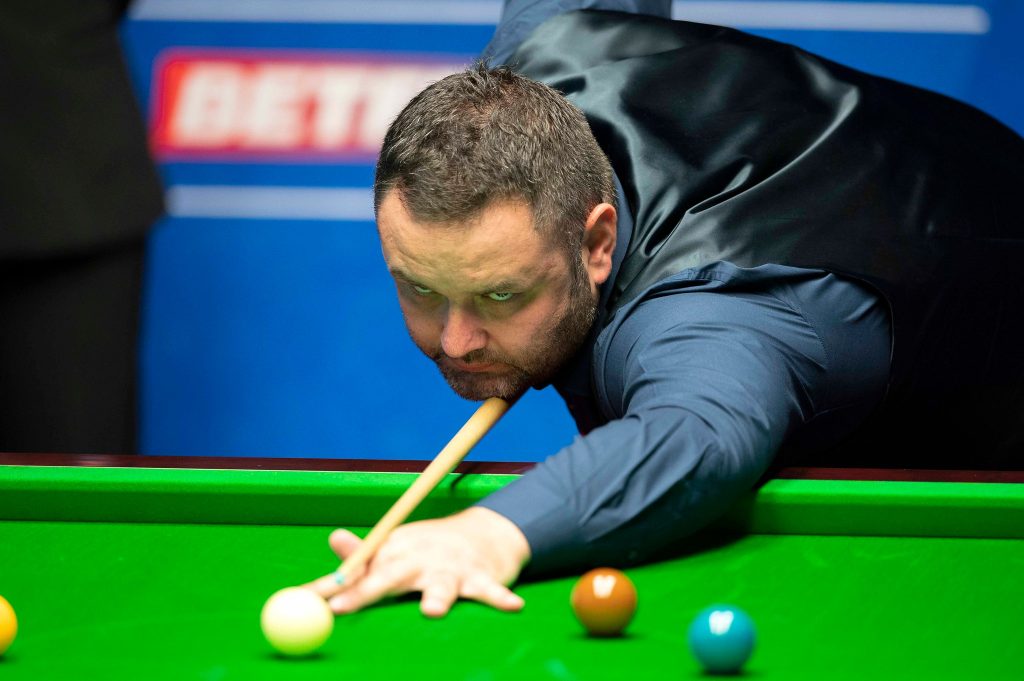 Another former UK Champion, Stephen Maguire, also booked his place in the last 32 with a hard fought 10-7 success over Zhou Yuelong. Glasgow’s Maguire trailed 3-1 in the early stages but recovered to win with a top run of 137.

“It was a dog fight from start to finish,” said six-time ranking event winner Maguire, now set for his 19th consecutive Crucible appearance. “I was gone. In the last frame, I was perfect in the balls three or four times and I kept seeing gravestones and skulls. It’s hard – snooker players understand what it’s like. You are out there trying not to lose, when you should just be trying to win. I would rather be in the top 16, back at home watching Judgement Day.”

Ashley Hugill earned a Crucible debut with a 10-7 win over Joe O’Connor and will become the 221st player to play at the famous venue. World number 77 Hugill, from York, made top breaks of 112 and 107 and secured the result in the 17th frame with a double the length of the table on the final black.

“I just kept telling myself that I’m not losing today,” said Hugill, who practises with Yan Bingtao and Zhao Xintong. “When I walk into the arena I will try to savour it and take it all in.”

Michael White will become the second amateur to play at the Crucible – after James Cahill in 2019 – thanks to a 10-8 victory over Jordan Brown. Welshman White, a two-time ranking event winner, dropped off the pro tour in 2020 but this run in Sheffield has guaranteed a new two-year tour card from the start of next season.

From 7-6 down, White won three frames in a row with breaks of 66, 71 and 87. Brown won frame 17 but his opponent clinched victory in the 18th with an excellent long pot on the final black.

“I thought I’d blown it because I missed so many chances in the last frame. That’s what the World Championship does to you,” said White, a quarter-finalist in Sheffield on his 2013 debut. “Jordan was the better player and I was fighting all day to stick with him. I crawled over the line in the end. It means so much to me. I have been working so hard and I feel I deserve this. I’ve had issues away from the table but that is behind me now and I have good people around me.” 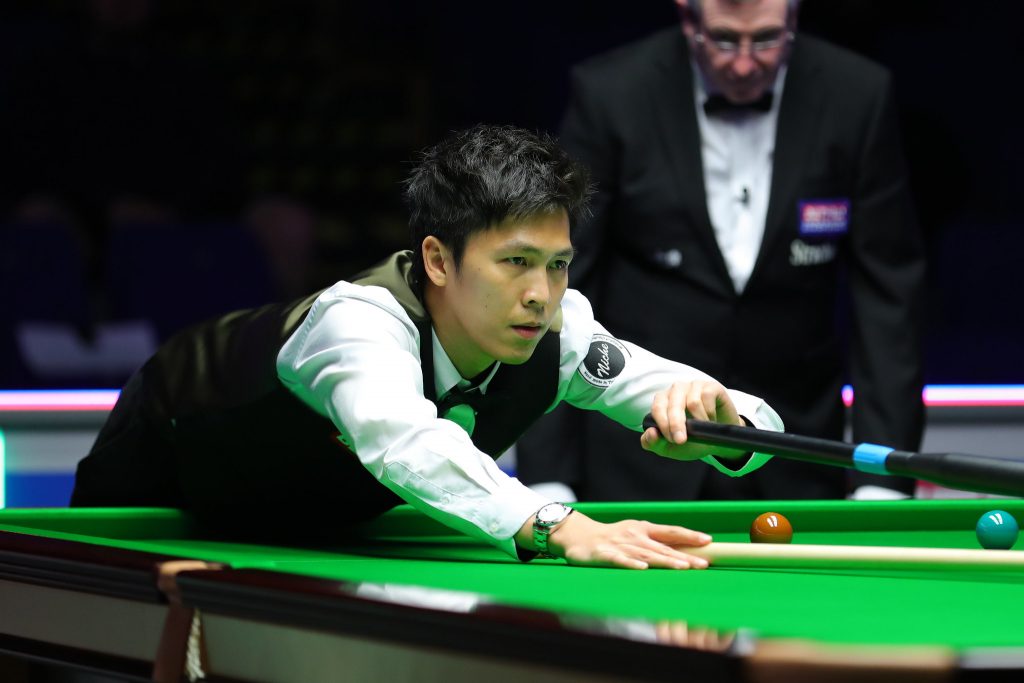 Thepchaiya Un-Nooh came into the qualifying rounds uncertain of keeping his place on the tour, but has passed the test with flying colours and secured his Crucible spot with a 10-7 defeat of Matthew Selt.

“I am so relieved, because I have never beaten Matthew before,” said former Shoot Out champion Un-Nooh, through to the final stages for the fourth time. “He played well and I can’t believe I performed that well. If I had lost my first match here I would have been off the tour so that was so important for me. I had to keep my self belief and fight for my family.”

Jamie Jones won the first seven frames against Tom Ford with a top run of 100 and eventually sealed victory 10-5.  “The first to ten matches seem to suit my game more, I feel like I can impose myself,” said Welshman Jones, who reached the quarter-finals on his Crucible debut ten years ago. “I just made it tough for Tom all day today. I don’t feel nervous in this tournament, I get more nervous in the smaller events and I’m not sure why. I’d love to play Ronnie O’Sullivan at the Crucible.”

Scotland’s Scott Donaldson scored an emphatic 10-1 victory over Allan Taylor with a top break of 132 while China’s Lyu Haotian top scored with 81 in a 10-4 defeat of Dominic Dale.

Ashley Hugill was the last to qualify yesterday and someone not many pundits or fans fancied to make it … but I have him in my predictions. He’s a much improved player, and a very hard worker. Moving to Sheffield and training at Vic Snooker Academy has transformed him.

Here is is, in his own words, as reported by Phil Haigh:

Ashley Hugill will make his World Snooker Championship debut this month after coming through qualifying and he says it is down to ‘ridiculously hard work’ and a little confidence boost from Ronnie O’Sullivan.

The 27-year-old Yorkshireman is enjoying his best season to date thanks to his run to the Crucible, beating Dean Young, Martin Gould and Joe O’Connor at the English Institute of Sport in Sheffield.

He has picked up memorable victories over the likes of Kyren Wilson, Jack Lisowski and Ali Carter this campaign, with the long hours of practice starting to really pay off.

Hugill has been described as the most improved player on tour and asked whether he would describe himself as such, he simply said: ‘Yeah.’

On what that improvement is down to, he explained: ‘Hard work, ridiculously hard work.

‘When I first started training in Sheffield I used to be in the Star Academy for 12 or 13 hours. I’d get there at 9am, play there all day till 9pm, clean the tables and leave at 10pm.

‘I did that for four days a week for two or three years. That was the most intense practice I did. That was from when I was about 20 till 23, 24. Seven hours a day does me now.’

Now based at the hugely successful Victoria’s Academy in Sheffield – home of the likes of Zhao Xintong, Yan Bingtao, Fan Zhengyi and Lyu Haotian – Hugill has moved from his York home to set up in the Steel City.

‘Three and a half years ago I moved to Sheffield,’ he said. ‘It needed to be done, I was commuting all the time. I’m a rubbish cook though, so it was a bit difficult having to do that for myself.

‘Victoria’s great. It’s not really the facilities, it’s the mindset and it’s the mentality and the feeling in the room.’

Some serious hours of practice are put in at Victoria’s Academy from all the players in attendance and Hugill says the hard work over the years gave him the knowledge that results would come.

Hours and hours on the practice table get you so far, but there are intangibles that can move a player onto the next level and Ronnie O’Sullivan provided something of a boost for the Yorkshireman.

The Rocket beat Hugill at the European Masters earlier this season and had some kind words for his opponent.

‘A big shout out to Ashley Hugill,’ said O’Sullivan. ‘He’s 27, so not very young in snooker terms, but a very good player and still not very experienced in tour terms. He has a lot of good qualities, and I’m not one for giving out compliments unless they are deserved. The same as Wu Yize earlier in the week, he will be a world champion if he develops and gets good advice.

‘There is a right way and a wrong way to play a sport, and they both play snooker the right way. You might win, but if you do it in the wrong way you ain’t getting my eyeballs. It’s the way you do it, sometimes. You have good players, great players and exceptional players.

‘And even some exceptional players win tournaments but are not great to watch. And you get good players that don’t win so many events but I’d pay to watch them, because they play the game the right way.’

O’Sullivan has also been working with the players at Victoria’s Academy and Hugill has taken a lot from his comments and even going running with the Rocket.

‘That was a massive confidence boost actually,’ Hugill said of Ronnie’s comments. ‘I’ve watched that interview a few times and my family love watching it.

‘He’s been good to me actually, Ronnie. We went for a run together, I’m quite into running, so we did that and I’ve been trying to learn from him.’

However, what advice the six-time world champion gives to the younger players at Victoria’s, is an academy secret: ‘Oh, I can’t tell you that,’ said Hugill.

The Yorkshireman will be in the Crucible first round draw for the first time on Thursday at 11am.