In the afternoon session, Ronnie pulled ahead of John Higgins by winning the last five frames of the session. He looks extremely determined. He overcame moments of frustration and managed to regain his focus rapidly when things were not going his way. His long potting was excellent. It’s worth remembering that Ronnie was 0-3 down at the start of the match; he has won 10 of the last 13 over the two sessions they have played so far. Of course, John on his day can do the same … and Ronnie will know that.

Ronnie O’Sullivan won a dramatic last frame of the session on a re-spotted black to open up a 10-6 lead over John Higgins in their Betfred World Championship semi-final.

The Rocket is aiming to make history this year, by securing a record equalling seventh Crucible crown to match Stephen Hendry’s tally. O’Sullivan, who has 38-ranking titles to his name, has captured almost every other meaningful record in the sport. A seventh victory at the Theatre of Dreams would undoubtedly be one of the highlights of his glittering career.

Higgins is hunting for a fifth World Championship title. The Scot last claimed the sport’s biggest prize 11 years ago at the 2011 World Championship. He has been runner-up on three occasions since then, in 2017, 2018 and 2019.

O’Sullivan hit the front for the first time in the match, after a 73 break in the opening frame of the afternoon put him 5-4 up. However, 31-time ranking event winner Higgins replied by taking two on the bounce to lead 6-5. The Rocket then crafted a contribution of 99 to restore parity at 6-6 heading in for the interval.

To that point Higgins had been utilising his excellent matchplay ability to stay with the more fluent O’Sullivan. The Wishaw cueman is yet to register a break over 58 in the match, while O’Sullivan has made two centuries and has a pot success rate of 94%. When play resumed O’Sullivan began to capitalise on his heavier scoring and a break of 91 gave him the 13th frame.

Higgins had the first chance in the next, but broke down on 38. O’Sullivan got himself back in the frame with a break of 55 and it came down to the colours. Higgins spurned a chance on a long range green and O’Sullivan pounced to make it 8-6. He then extended his lead to three thanks to a run of 70.

The session ended with classic piece of Crucible drama. Higgins again failed to capitalise on the first chance after missing a black with three reds left on a break of 53. That left O’Sullivan 51 behind with 51 on. After an initial run of eight, he produced a sensational clearance of 43 to force a re-spot. It went his way and he struck a crucial blow to end 10-6 up.

Those are the scores and stats for this session:

Here are the two critical breaks of the session, shared by Eurosport on their YouTube channel:

Judd Trump and Mark Williams played two session yesterday. Willo started the day 7-1 behind, he finished it only 13-11 behind and was by far the better player in the third session, a session he won by 6-1. 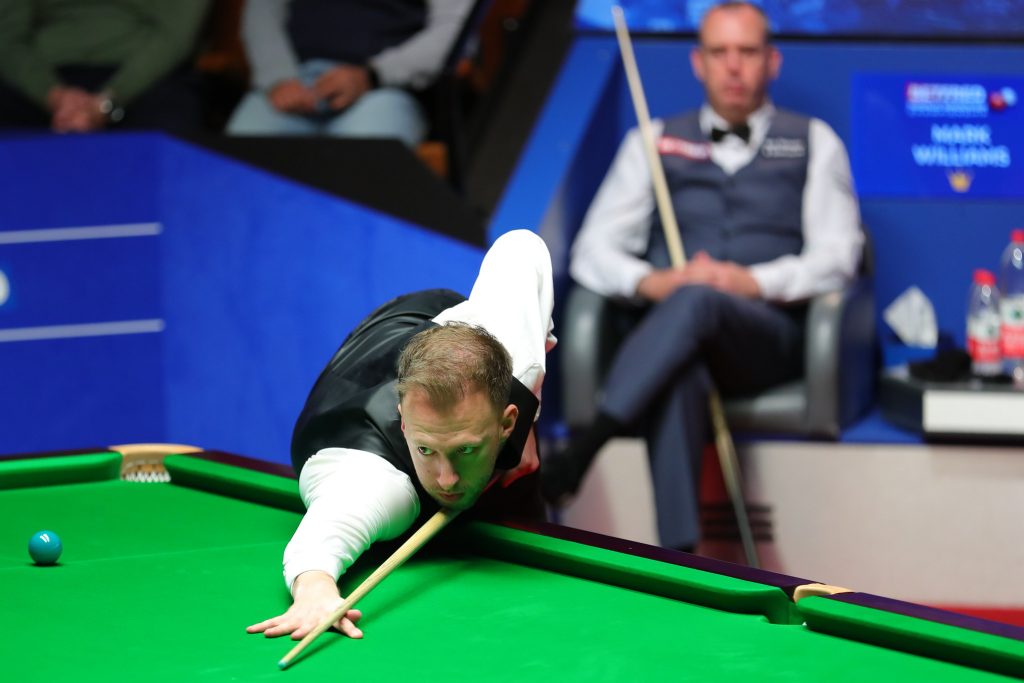 Judd Trump and Mark Williams shared the eight frames of the second session of their Betfred World Championship semi-final on Friday morning, leaving the Englishman 11-5 ahead.

Trump remains on target to reach the Crucible final for the third time, having won the title in 2019 and finished runner-up to John Higgins in 2011. He is aiming to become only the seventh player to lift the trophy more than once in Sheffield.

World number four Trump built a 7-1 advantage over Williams in the first session on Thursday, and taking four of the eight frames so far on Friday keeps him on track. They return at 7pm tonight for eight more frames, and if the Bristol cueman can take six of those then he’ll get to 17 and wrap up the match without needing to return on Saturday.

Welshman Williams, a three-time Crucible champion, looked jaded on Thursday, but the 47-year-old was sharper today and will believe he can turn the match around. He may draw on memories of his 2000 semi-final against John Higgins when he came from 14-10 down to win 17-15.

Williams took the opening frame this morning to reduce his deficit to 7-2, but spent the next two in his chair as Trump compiled breaks of 114 and 100 to extend his lead to 9-2. The high scoring continued as Williams made a 119, his 13th century of the tournament.

The first two frames after the interval were shared to leave the score at 10-4. In frame 15, world number eight Williams was on 52 when he over-cut a tricky red to a top corner. Trump capitalised with a fabulous 79 clearance which included an excellent pot on the last red to a baulk corner.

In the last of the session, Trump was on 18 when he ran out of position, going into the pack of reds. A run of 70 from Williams saw him finish on a high note. 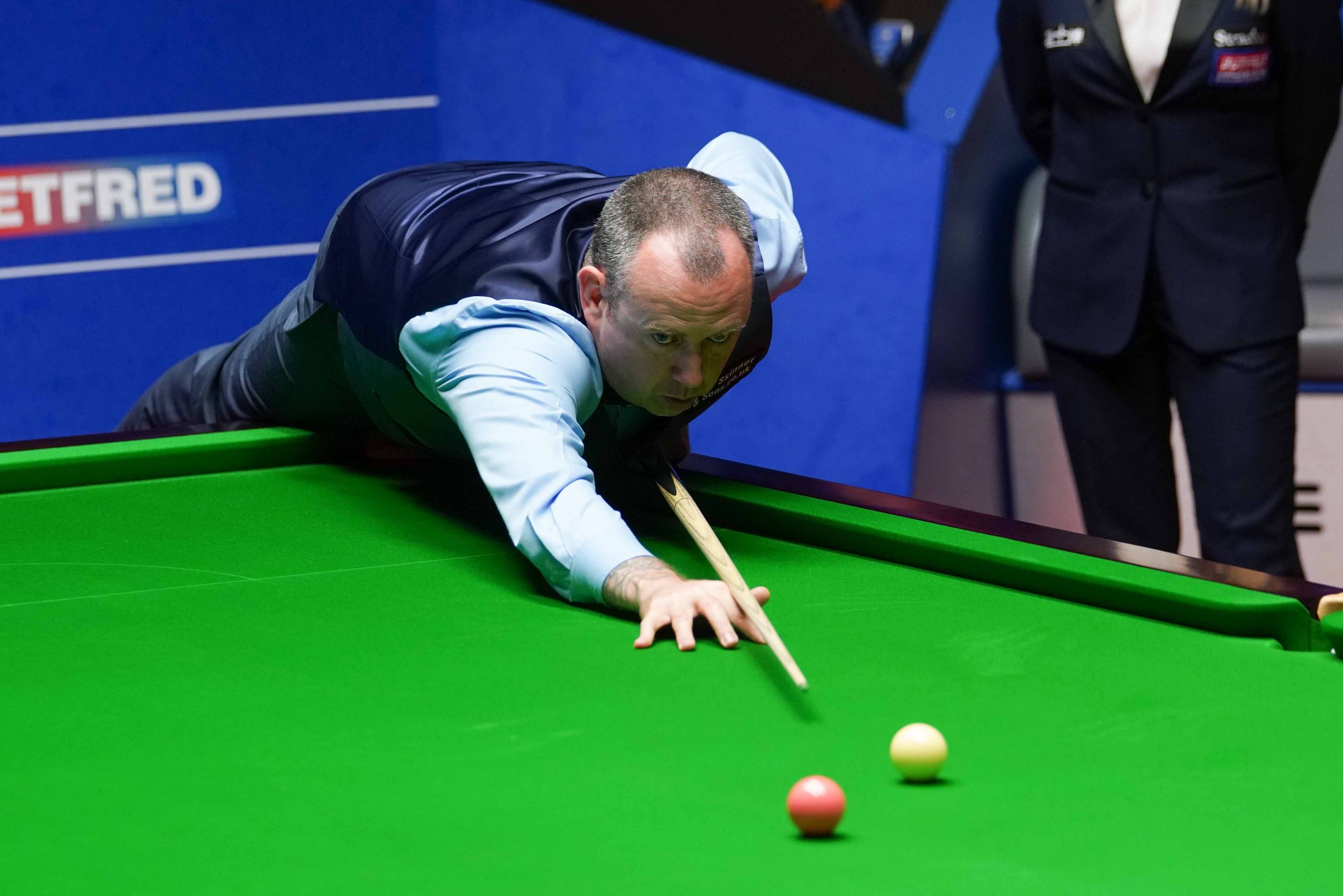 Mark Williams took six of this evening’s eight available frames, to fire himself back into contention at 13-11 down in his Betfred World Championship semi-final with Judd Trump.

Williams found himself 7-1 behind after a disastrous opening session yesterday and trailed 9-2 during this morning’s play, as well as 12-5 this evening. He has summoned his very best snooker to keep the tie alive. The seven-frame deficit would make it the biggest ever comeback in a Crucible semi-final if he were to go on and win.

The Welshman has already surpassed his personal best for centuries at the World Championship, having made 14. He requires just two more to equal the record for a single year at the Crucible, set by Stephen Hendry when he made 16 in 2002.

Williams is aiming for a fourth world title, he has lifted the famous trophy in 2000, 2003 and 2018. The 24-time ranking event winner defeated China’s Yan Bingtao 13-11 in an enthralling quarter-final to earn his place in this year’s last four.

Trump’s only Crucible crown to date came three years ago, when he thrashed John Higgins 18-9 in the 2019 title match. The Ace in the Pack beat Stuart Bingham 13-8 in the previous round. He came into this evening’s session with an 11-5 advantage over Williams.

The pair produced a scintillating standard for the packed Crucible audience when play got underway. Trump opened up proceedings with a break of 120, to stretch his lead to 12-5. However, an inspired Williams refused to back down and replied with breaks of 137, 58 and 53 to take the next two frames and close within five.

A dramatic last frame before the mid-session came down to the colours. Williams eventually deposited a stunning long range yellow and cleared to the pink to send a raucous Crucible crowd wild, moving just four behind at 12-8.

When play got back underway an inspired Williams continued to push his way back into proceedings. Breaks of 57 and 77 saw the 47-year-old make it five on the spin and claw his way back to 12-10 down.

A century run of 113 gave 23-time ranking event winner Trump his second frame of the evening, but it was Williams who took the last to end 13-11 down. The players left the arena to a standing ovation.

The end of the session came at the right time for Judd as Willo clearly had the upper hand and Judd looked rattled. Judd is still ahead but not by much and if Mark can play today like he did yesterday, there is only one winner … the cheeky Welsh veteran.

What clearly transpired on social media yesterday is that there is nothing like long multi-session matches to produce drama, twists, turns and thrills. “Shorter matches” is NOT what the fans of the sport want. They create more “shocks” and probably suit the bookies but they never deliver the drama and excitement we have seen yesterday. To get rid of the long formats in the hope to capture more audience – with a short attention span – is a big mistake IMO. There is absolutely no guarantee that such audience will be gained, and, if gained, will stay interested over time, but there is a real risk to lose the current faithful fans. Recently, I have read/heard many complaints about the prospect of going through endless qualifying events and a fragmented start of the season once this fantastic World Championship is over. Of course, we have lost the Chinese events for now, and it’s unclear when they will be back. That’s part of the issue and it can’t be helped. The way the sport goes forward though is in the hands of the governing body.