The 2022 ranking CLS week 3 starts today with Willo in action (if someone can extract him from the golf courses, that is…)

World Snooker Tour and Hong Kong Billiard Sports Control Council (HKBSCC) are pleased to announce the return of the Hong Kong Masters to the WST calendar in October this year.

This prestigious invitation event was last held in 2017 and was a tremendous success. The last edition in 2017 was held in Hong Kong’s Queen Elizabeth Stadium, which was recognised by many players as one of the best venues for a snooker tournament. Neil Robertson beat Ronnie O’Sullivan in the final.

This time it will be staged, for the first time, in the Hong Kong Coliseum, the largest indoor stadium in Hong Kong with a maximum capacity of 10,000.

HKBSCC will invite eight top players, including Hong Kong’s snooker icons Marco Fu and Ng On Yee, to compete over four days from 6 to 9 October 2022.

WST Chairman Steve Dawson said: “We are excited to bring this event back to the calendar for the first time in five years and we are thrilled to be working with HKBSCC on what will be a fantastic tournament.

“Many of the world’s top players described the 2017 Hong Kong Masters as one of the best atmospheres they have ever played in, and this is another opportunity for them to experience the support of the local fans.”

HKBSCC Chairman Vincent Law said: “The Hong Kong Masters will be the first major international sport event in Hong Kong since we were hit by the pandemic. There is no better occasion to show to the world that Hong Kong is back for business. We hope the tournament this time will set more records and bring excitement that the public have been longing for. We are thankful to WST for its support to billiard sports in Hong Kong. We hope the players and the people of Hong Kong will have some fun.”

The player line up and ticketing information will be announced by HKBSCC shortly.

Snooker returning to Asia is good news. It will be interesting to see who are the 6 “other” invited players and who will want to make the trip. I’m not sure though that 10000 persons around one table will work … already at the Crucible, with less than a thousand spectators, the table looks minuscule from the rafters. 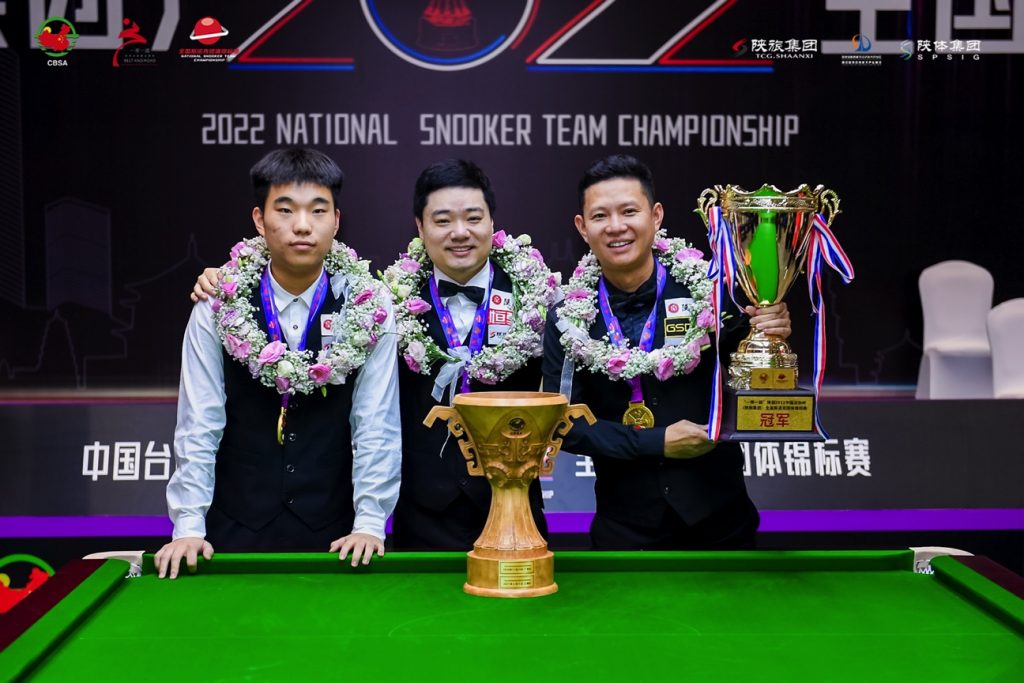 Ding Junhui, Fan Zhengyi and Mei Xiwen were the members of the victorious Shaanxi team at the CBSA Cup in Xi-an, which concluded on Saturday.

Running from July 5th to 9th at the Xi’an Aerospace International Conference Centre, the CBSA Cup is regarded as one of the most prestigious national events staged in China.

Over the five days, 29 teams from all over China attended, featuring professional World Snooker Tour players, as well as leading amateur players and rookies.

The Shaanxi team, named by Shaanxi Tourism Group, beat Guangdong 4-2 in the final. Zunyi and Beijing shared the third place.

WST congratulates the CBSA on the successful staging of this fantastic event.

Congratulations to the Shaanxi Team!

All three members are or were professionals. I find it a bit funny that Fan Zhengyi is only mentiommed “en passant”, when, of the three, he’s the one who won a professional event most recently… anyway…

The English Snooker Championship is the longest running competition in snooker.  It was first help in 1916. There are many prestigious names on that trophy, but not Ronnie’s 😉

The Under-18 English Snooker Championship was won by Stan Moody, who defeated Aidan Murphy (7-0 !!!) in the final.

Ronnie was in Dundee for snooker exhibitions …

Not much transpired so far, maybe Csilla will be able to tell us more.

From what I could find …

… Ronnie insisted to drive the “taxi” himself

… the club and its owners made him feel very welcome

… and one of these two had a 147 yesterday evening

The report by Csilla is in the comments section. Thank you Csilla!

The full show is now available, shared by the club on YouTube