Fan Zhengyi had less than 6 months to enjoy being a reigning champion … It was only end February this year that he lifted the European Masters trophy, beating Ronnie in the final. It was presented as a major shock, and it certainly was a big surprise but we shouldn’t forget that he had beaten Kyren Wilson, Yan Bingtao, David Gilbert and former World Champion, Graeme Dott, en route to the final. He had been awsome all week. But he found it difficult to build on that: he has since only won one match on the main Tour. He was beaten, and well beaten yesterday by Michael Judge

Here is WST report on day 1 at the Stadhalle Fürth 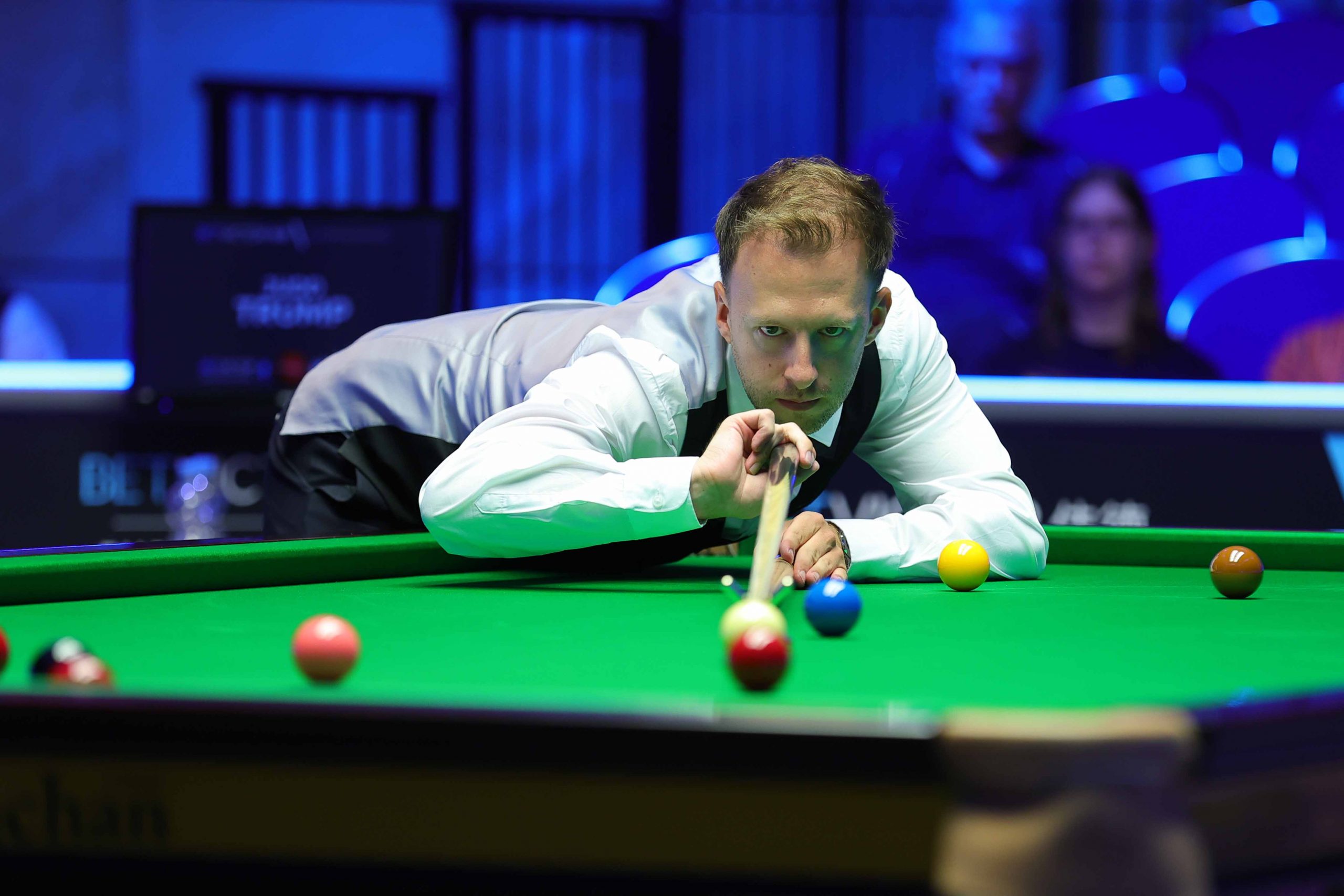 Despite his suitcase failing to arrive in Fürth, Judd Trump donned a fellow competitor’s waistcoat and successfully saw off Noppon Saengkham 5-2 on day one of the BetVictor European Masters.

Trump’s suitcase didn’t appear at the airport after landing in Germany yesterday and he was forced into some emergency shopping this morning. After acquiring trousers, shoes and a shirt, the Bristolian borrowed Xiao Guodong’s waistcoat for today’s tie.

Trump claimed wins at the Champion of Champions and the Turkish Masters last season and ended on a positive note with a fine run to the World Championship final. He came just short of a second Crucible crown, after succumbing to an 18-13 loss against Ronnie O’Sullivan.

The Ace in the Pack took the opener this afternoon, before a century run of 103 helped Saengkham to immediately restore parity at 1-1. A break of 72 then saw Trump regain his lead and he claimed the fifth on the black to head into the mid-session 3-1 ahead.

When play resumed 2019 World Champion Trump added to his advantage, but Saengkham stayed in touch at 4-2 thanks to a break of 96. However, Trump then got over the line to book a last 64 tie against Ashley Hugill.

Trump said: “We managed to scramble some stuff together, a bit of this and that. I was walking about the shops for about three hours this morning trying to find some clothes. In the end I managed to do a good job. It is quite difficult playing in clothes you aren’t comfortable in, but I managed to get through that game.

“It is a lonely feeling seeing everyone with their suitcase walking to the bus, while I’m the only one without mine. It was disappointing, but my cue came and in the end it didn’t make much difference. Hopefully I can get my case back and put on some new clothes for tomorrow.”

Defending champion Fan Zhengyi was beaten at the first hurdle, succumbing to a 5-1 loss against world number 86 Michael Judge.

Fan was a shock winner in last season’s event, entering the competition as a 750-1 outsider. However, he upset the odds to land a stunning 10-9 win over Ronnie O’Sullivan in the final.

Irishman Judge struggled to make an impact having returned to the tour through Q School at the start of the last campaign. He’s made a strong start this time around and will now face Welshman Daniel Wells in the last 64.

Brecel came into this week as the early leader of the BetVictor Series, where the player who accumulates the most prize money over the eight qualifying events will land an eye watering £150,000 bonus. The Belgian will be leapfrogged into the top spot by the end of this week.

As usual a lot is left out that report, notably the whole evening session that saw Mark Selby bow out of the tournament as well. Of the four top seeds who had their first round match held-over, Trump is the only one who came out the winner.

Wu Yize and Judd Trump played extremely well. Noppon Saengkham didn’t play badly at all himself. It was a brutal draw for both Judd and Noppon. The german crowd was offered an entertaining, high quality match yesterday afternoon.

Fan, on the other hand, struggled badly in front of a very sparse crowd. Michael Judge himself didn’t play that well and he will know that he will need to improve to progrees further in the tournament.

Hossein Vafaei didn’t show up and I don’t get that … why not withdraw if you can’t make it? Why have your opponenent waiting in the arena until the “match” is over? That’s rude, in my view.

It was overall a good day for the Chinese players again:

Si Jiahui beat Anthony McGill by 5-2, despite the fact that Anthony scored three of the five breaks over 50 made during the match. Anthony has, more than once, admitted that he struggles to get motivated for “smaller” tournaments. All good for Si!

Zhou Yuelong won the last three frame of the match to beat Graeme Dott by 5-4. Graeme is never an easy opponent.

During the evening session, Yuan SiJun beat an out-of-sorts Mark Selby by 5-2.  It was a hard-fougth match, that featured only two breaks over 50, including a 137 by Selby. For Mark Selby to lose this type of match is very uncharacteristic, and actually worrying. TBH, he didn’t look well out there.

David Grace beat Michael White by 5-2. I wasn’t expecting that. I’m pleased for David, who I like very much as a person. I’m a bit worried for Michael who didn’t look too clever and seems to have put weigth on again. I hope he’s not back to some, well … bad habits.

The other matches went basically the way you would expect them to go and you will find all detailed results on snooker.org.

Gary Wilson probably didn’t endear himself to the German crowd, as he knocked Lukas Kleckers out:  he beat him by 5-2.