Ronnie O’Sullivan and Judd Trump will be on opposing teams in the opening match of the new BetVictor World Mixed Doubles in Milton Keynes next month. 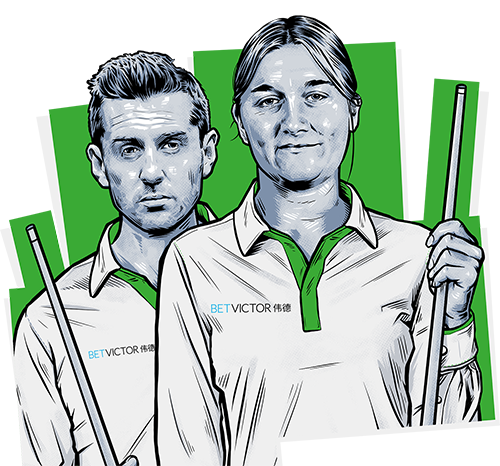 The innovative tournament sees the world’s top four men each paired with one of the top four women in a team format. Televised live by ITV, the invitation event runs over the weekend of Saturday September 24 and Sunday September 25 at the Marshall Arena at MK Stadium in Milton Keynes.

The teams will compete in a round robin format, each match played over four frames. At the end of the group phase, the top two teams will go through to the final, which will be best of seven frames. The two players in a team will make alternate visits to the table (rather than alternate shots)

The Saturday afternoon session fixtures, from 1pm, will be:

Followed by Mark Selby and Rebecca Kenna versus Neil Robertson and Mink Nutcharut.

On the Saturday evening from 7pm, the two losing teams from the afternoon matches will go head to head, then the two winning teams will meet.

All four teams will be in action again on the Sunday afternoon 1pm session, with the order of play to be announced on the Saturday evening. The top two teams from the group stage will go through to the final on Sunday from 7pm.

A WST spokesman said: “It’s a fantastic format and we’re delighted to start the event with Ronnie O’Sullivan and Judd Trump going head to head in their respective teams, reviving memories of their World Championship final clash earlier this year when the Rocket won his seventh Crucible crown.

“It’s an incredible line up of players and we’re fascinated to see how they will adapt to the team format. Snooker is one of the very few major sports where men and women can compete together and this is a fantastic opportunity for us to showcase our sport to a huge audience both in the arena and on ITV’s main channel.

“Now that the format has been released we expect to see any remaining tickets sell fast, so fans are urged to take the opportunity to see snooker’s most decorated stars compete in a unique format.”

The video shared by in the comments section by Kalacs is part of the Breakdown podcast  episode where Ronnie will talk about pressure, training, anxiety and more.  The full episode will be  out next week. This information was shared on twitter by Eurosport and Ronnie himself.

Ronnie is always looking for new endeavours outside snooker…. here is Phil Haigh reporting on his latest project

Ronnie O’Sullivan reveals hopes to open food bank: ‘I need challenges like that’

For years now he has tried to not put all his eggs in the snooker basket, diversifying his interests to keep the pressure off his potting and give his mind other things to focus on.

This is partly in preparation for when playing his chosen sport is no longer an option, but at the same time he believes it has helped him prolong his career at the very top.

‘It’s very dangerous for any sportsman to just invest totally in the sport,’ O’Sullivan told The Climb Podcast. ‘I see it with snooker players, they invest so much in snooker that when it’s over, it’s like, “Who am I? What can I do?”

‘I don’t want to be that person who finishes his career and just feels lost. It’s so important to have a purpose in life. For me I’m always looking for the next purpose and it can never be snooker.

‘It’s too demanding, it’s too difficult, it’s too on your own, it’s too fickle. To try and invest your whole time and energy and it can be taken away from you – not because of anything you’ve done, but the competition might be better or you have a bad back – so you think, I can’t play, so what do I do? It’s difficult to make that transition, I think.’

O’Sullivan does punditry work, has written books, occasionally opens a shop and is always engaged with his running, but he now has a new focus ahead of him.

The Rocket spent Christmas Day at a food bank in London and, along with not getting the satisfaction he wants from snooker, has been moved into wanting to set up his own.

‘I woke up the other morning and thought these last weeks since I won the World Championships, the first week I was knackered and a bit low and didn’t feel like doing anything,’ Ronnie continued.

‘Then I came out of it, but it wasn’t as good a payback as I thought, I’m not feeling the same high as when I won the first, or third of fourth one.

‘That’s not a good sign. I thought, what will actually make me happy and give me a purpose in life?

‘I thought, I know what I need to do, I need to open up a food bank, for people who can’t get the basics in life, a bit of food!

‘That’s probably the next thing I want to do because I worked with one in Walthamstow.

‘I was helping there on Christmas Day, it goes all year round it’s great what they do, but I was there on Christmas Day and I just looked at the people there and what they do, the people who come there and I just felt good being there, I felt good being around those people. The whole thing about it felt right, to be part of it.

‘It takes people giving their time for free, with no reward, other than them just wanting to give something back.

‘For me now I need challenges like that and things that make you feel good about yourself.’

It’s a very generous idea but, quite frankly, I’m not sure Ronnie has any understanding of the size and complexity of such a project, nor of the level of commitment this would require…

That said, I’m sure he’s genuine in what he says. I have been with him at events, and at exhibitions, and on numerous occasions I have witnessed him spontaneously trying to help homeless persons he had just spotted in the street, usually by going to the closest shop to buy and bring them some warm food or drink and taking time to have a chat with them.  And that even happened right after matches he had lost.